The Return of Sherlock Holmes by Arthur Conan Doyle 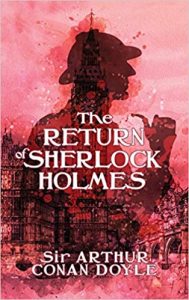 Sherlock Holmes is one of the most beloved fictional deteDctives that has graced English literature, and we have Sir Arthur Conan Doyle to thank for making the introduction. Doyle began enchanting readers with Sherlock Holmes’ deductive skills and crime fighting abilities in the late 1800s and early 1900s and the famous detective has remained popular to this day. However, readers were stunned when Holmes died while grappling with the criminal mastermind, Moriarty. In light of the public outcry, Doyle realized that the demise of Holmes had been premature. “The Return of Sherlock Holmes” occurred soon after.