“Allowing the Destruction of Life Unworthy of Life: Its Measure and Form” by Karl Binding & Alfred Hoche

“The Principles of Scientific Management” by Frederick Winslow Taylor 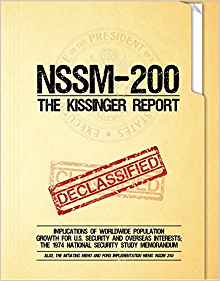 In 1974, President Richard Nixon ordered his national security council, under the direction of Henry Kissinger, to study the implications of population growth to the interests of the United States and propose action. This classified study was called NSSM-200. The study was concluded later that year, but Nixon was otherwise occupied, and did not act on the study. His replacement, Gerald Ford, would direct his administration to implement the memo. Upon its declassification a little over a decade later, a stunned world learned that the United States government had specifically targeted the world for de-population, with special emphasis on thirteen countries: India, Bangladesh, Pakistan, Nigeria, Mexico, Indonesia, Brazil, the Philippines, Thailand, Egypt, Turkey, Ethiopia and Columbia. The memo pointed out the importance of abortion as a population control measure and tied US foreign aid to a country’s willingness to participate in population control programs. One section boldly calls for conditioning the world’s citizens to desire small families through “Education and Indoctrination.” To be clear, the authors of the memo insist that whatever measure is proposed to ‘least developed countries’ will be implemented in the United States, as well. This volume contains the complete and unabridged text of NSSM-200 exactly in its declassified form. It also contains the Initiating Memo and Ford’s Implementation Memo (NSDM 314). The volume is free from any commentary, for or against the policies contained within it.