Henry of Ofterdingen: A Romance by Novalis and Ludwig Tieck

An Essay on the Principle of Population: The Original 1798 Edition by Thomas Malthus 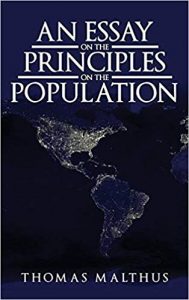 Thomas Malthus was a mild-mannered economist who set the world afire in 1798 with this essay on the ‘principle of population.’ Prompted to put his thoughts down on paper in response to a work by William Godwin (“Avarice and Profusion”) and other writers, such as Marquis de Condorcet and Adam Smith, the book was originally published anonymously… and for good reason. Malthus understood that the implications of his ‘principle’ did not align well with Christian charity.

Charles Darwin would eventually seize upon the ‘population principle, ‘ where strife surrounds humanity’s quest for scarce natural resources, as the actual mechanism by which life emerged in the first place, through natural selection. Now imbued with the certainty of science, Malthus’ principle combined with Darwin’s insight, was begging for application to human society. The application most commonly is called ‘eugenics.’ However, other applications exist, too, such as ‘population control.’

This is the original 1798 edition. In later editions, Malthus would spend a great deal of time clarifying his position and defending himself against critics. It was one of these later editions that Darwin was influenced by. Still, it is always interesting to hear the argument as it was first proposed.

This edition also includes the essay by Godwin that first moved Malthus to write his book.